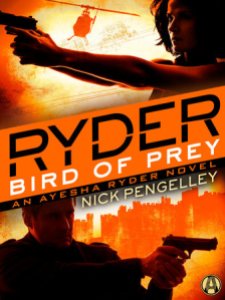 She hoped he hadn’t changed his mind. She wouldn’t be surprised if he had. She still didn’t know why he’d agreed to bring the Maltese Falcon to a London pub.

Korte inhoud
“According to the last words of a dying man, the Maltese Falcon was no mere legend: The fabulously jeweled golden bird really existed—still exists, in fact. And Ayesha Ryder is hot on its trail. Rumor says the Falcon conceals clues to the burial place of Harold II, the conquered Anglo-Saxon King of England—and to an artifact of astonishing significance that few besides Ryder would understand.

Hunted by Scotland Yard, MI5, and those who seek the Falcon to break up the United Kingdom, Ryder joins forces with Joram Tate, a mysterious librarian with a reputation for turning up things that don’t want to be found. Soon Ryder and her handsome, erudite new companion are venturing through lost tombs and ancient abbeys, following a trail left ages ago by the Knights Templar.

Ryder knows she’s close to a game-changing secret, hidden for a thousand years beneath an English castle. But with ruthless killers waiting in the wings, Ryder must go medieval—to defend her life, her country, and the world as we know it.” END_OF_DOCUMENT_TOKEN_TO_BE_REPLACED